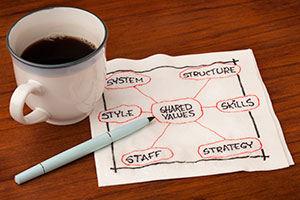 You never know when you’ll experience an ah-ha moment that transcends the original application.

Two members of our team recently experienced one of those moments while attending a performance of BodyVox, an internationally touring dance company based in Portland. While reflecting on the unfortunate lack of appreciation and support for liberal arts in the education system, Jamey Hampton, BodyVox co-founder and co-artistic director, commented. “We can’t say it’s a cultural problem. We ARE the culture.”

“Ah-ha,” we said. There are no spectators when it comes to culture (both within the organizational context and beyond). Everyone plays a role, and the role leaders play is particularly impactful and should never be underestimated.  If there’s a problem with the organizational culture, then every leader has a responsibility to identify it, shine a spotlight on it, and identify a way to fix it.

The challenge is that organizational culture may seem like an unruly beast that is impossible to tame. This couldn’t be further from the truth. A number of factors influence culture, and each one can be altered to create a stronger alignment between our current state and the one to which we aspire. Let’s explore three main contributing factors:

For each of the contributing factors above, each individual in the organization can play a powerful role in helping evolve the culture to a more ideal state. Taking an active role in defining the right culture for the organization and ensuring the people and policies align with the organization’s values is everyone’s responsibility.